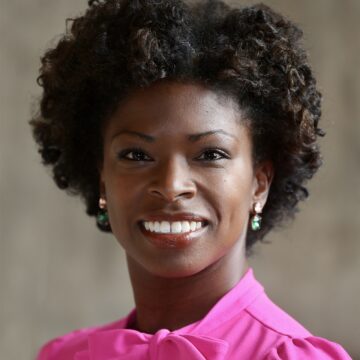 Stephanie Garrett-Stearns is vice president of communications and fund development for The Community Builders, Inc., a position she has held since 2015. She leads communications and fundraising strategy and program execution for a leading nonprofit developer of residential and commercial real estate. She joined the organization in 2011.

Garrett-Stearns was previously head of public relations and chief corporate spokesperson for the Siemens division, Osram Sylvania. A recipient of the Boston Business Journal's 40 Under 40 honor, Garrett-Stearns is an award-winning communications strategist who provides informative and insightful media commentary. She has been quoted by The Huffington Post, CNBC, The Boston Globe and USA Today, among others.

A Flint, Mich., native residing in Boston, Garrett-Stearns serves as an advisor and board member for several non-profit organizations, including the Boston Pearl Foundation and the Massachusetts Institute for a New Commonwealth (MassINC). She is also an active member of Alpha Kappa Alpha Sorority, Inc. and The Links, Incorporated.

Garrett-Stearns completed the Business Management Institute at Cornell University in 2008. She holds a Master of Business Administration degree from Washington University in St. Louis, and a bachelor's degree in human resources management from Michigan State University.